If you’re looking for a portrait of everyday London life during the Blitz of the early ’40s, look no further than Hope and Glory (1987) – with the small caveat that the tumultuous events are shown from the perspective of a young boy, who often finds the liberation from the usual status quo a source of covert pleasure rather than dismay. The director successfully manages the deft act of conveying Billy’s sense of delight in certain wartime happenings on the home front, whist avoiding any trivialization of the subject matter.

In terms of costuming, the protagonists are all dressed in standard-issue excellent British 1940s repros: either military uniforms or working men’s ensembles of trousers, shirts, vests, suspenders, and fedoras for the chaps, and a (suitably rationed) array of floral house dresses, tea dresses, and little sweaters for the dames, with their hair elaborately victory-rolled. Here are some stills: 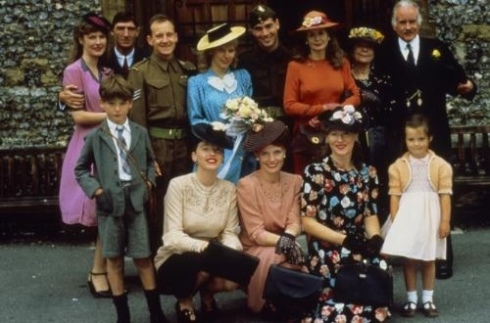 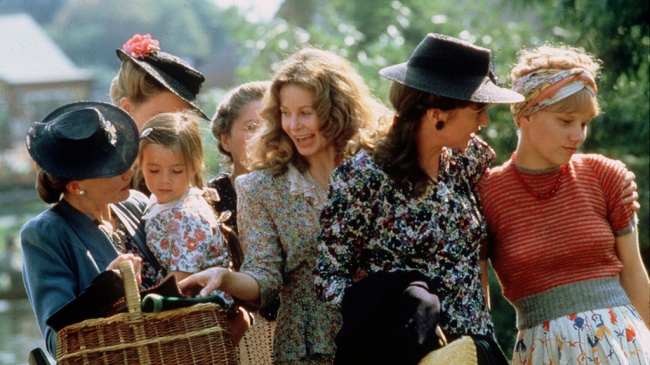 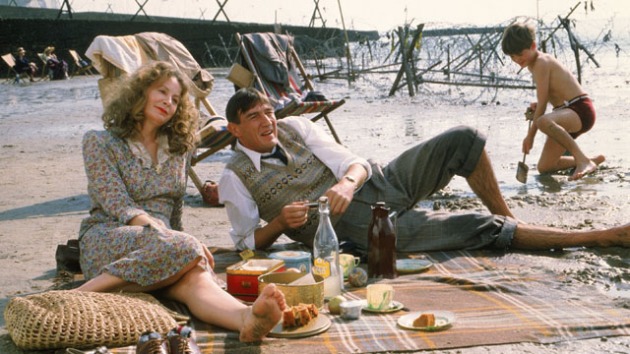 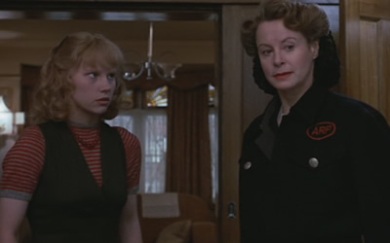 …and the children’s school outfits:

In addition, there are four specific “clothing moments” I’d like to draw your attention to ->

One is the scene where Billy obediently (if grudgingly) pencils dark lines up the back of his older sister’s legs, so that she can appear to be wearing stockings at the dance she’s attending that evening. You can’t see the lines in the pic below, but you can see why she insisted that Billy draw them all the way up, just in case some exposure happened “in medias jitterbug”!

Second is the wonderful scene where the ladies attend what appears to be some sort of clothing thrift sale, no doubt with ration coupons in hand. Billy is comically trapped between racks of dresses, with a cluster of ladies in their underthings on either side. (I couldn’t locate an image, but I’m sure you can imagine them all in their camisoles and tap pants….) 😉

My very favourite clothing-related scene happens when a German airman is shot down in a dogfight, and parachutes right into the family’s section of town. As soon as the pilot is – somewhat ineptly – taken into custody by an elderly policeman with a baton, a crowd of thrilled ladies converges on his fallen parachute shrieking, “Parachute silk!!” and dancing around in delight. It was a brilliant idea to include this scene, which is such a fabulous evocation of the “fashion on the ration” approach; women of that era genuinely were overjoyed if they could get their hands on some parachute silk to fashion into underwear, scarves, or even wedding dresses. (These items still pop up from time to time in vintage shops.)

Finally, there’s the scene at the end, where Billy, having said farewell to his idyllic summer freedom and dutifully donned his school attire (complete with rather adorable Eton cap), returns to school only to find that the building has been reduced to rubble during a nighttime air raid. The scene of the children elatedly flinging their caps and gas mask boxes into the air invokes a sense of catharsis that anyone who’s ever experienced a school cancellation will readily share in!

As an added bonus, here’s an original costume illustration from the film: 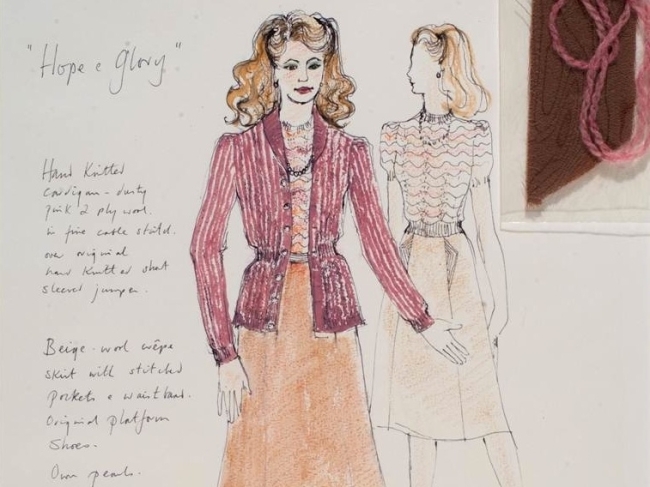 P.S. Someone needs to come up with a knitting pattern for the adorable wool cap worn by Billy’s little sister! Knitters, take note…. 🙂