I think I must have a soft spot for underdogs…. Or perhaps I’m just easy to please (a.k.a. evincing a sporadic lack of champagne taste, movie-wise!). Reason for these musings? I am unapologetically fond of 4 films which are widely considered to be major box-office bombs:

* Valerian & the City of a Thousand Planets

In each case, I found lots to love, despite the film’s shortcomings….

Jupiter Ascending? Fascinating world-building (although it admittedly does take several viewings to figure out everything that’s being said in that regard, particularly when it’s Sean Bean delivering explication in his – gorgeous – Sheffield accent), as well as a literally stellar (see glorious end credits) score…. I mean, they made the movie after the soundtrack! How brilliant is that?

Valerian? A delightfully quirky & colourful aesthetic (complete with gigantic jellyfish, adorable pearl-excreting creature, and some nifty costume details… more on those in a later post!), along with a bunch of quirky and colourful characters (one of my very faves being “Bob the Pirate”, a man of few but appealingly bizarre words).

Golden Compass? I believe I have already waxed on about my adoration for its costumes…. Ah, the costumes! Definitely on my permanent top-ten list. (But am I not equally excited for the forthcoming His Dark Materials adaptation, you ask? Well, if you need to ask, you didn’t hear my barbaric “SQUEE!!” when I watched the trailer!)

But now, on to our show:

Firstly, a sigh – for the commercial failure of this laced-with-shots-of-brilliance film, as well as for the fact that this box-office shipwreck was helmed partly by Peter Jackson, one of my all-time faves (as an inveterate – and veteran – LOTR aficionado).

I will not spend time debating the (de)merits of Mortal Engines as a film, except to say that the opening sequence will, I think, be rightly acknowledged by all but its most ardent detractors (hee, hee) as simply SPECTACULAR.

Firstly, how can you not fall in love with a red like this?

Oh, my…. That crimson scarf stole my costume-craving heart.

But when paired with a distressed charcoal ombré top & a green greatcoat, like this? 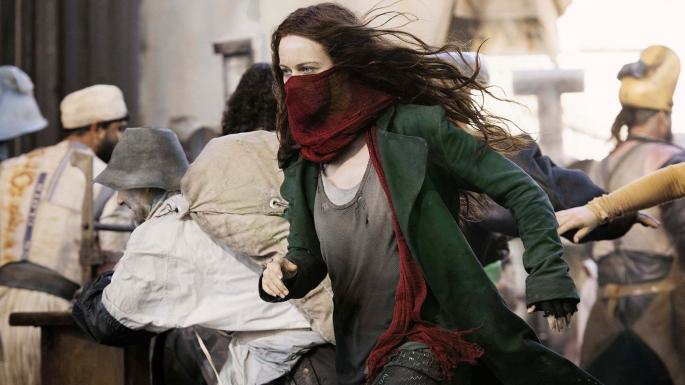 Too much brilliance! After all, when a costume designer takes on one of the infamously verboten colour-combos (the dreaded “Christmas colours”) with such verve and aplomb, I cannot but applaud. Colour-stereotyping, you have met your match!

Nor is Hester Shaw the only character graced with vivid red attire (and accoutrements)….

There’s also Anna Fang, who gets a truly memorable entrance, made more stunning by the scarlet trench coat.

And any truly chic girl always matches her airship to her overcoat:

On other costume notes, we have a rather dishily clad (although otherwise less-than-admirable) Hugo Weaving, in a grey-&-green ensemble which (I think) subtly counterpoises Hester’s own green outerwear:

And he gets a very pretty prop as well:

Last but not least, our main character (kind of?), Tom Natsworthy, has natty attire worthy of some costume-love as well:

You may recall my passion for “jacket movies”…. Well, I’d call this a “great-coat movie”! 🙂

I mean, just have a gander at this great coat line-up: 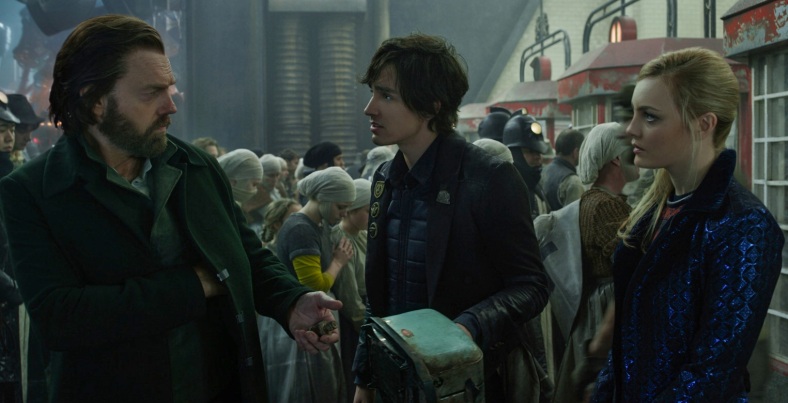 Finally, a dreamy gaze at the swish shearling aviator jackets worn by both our hero Tom, and by a member of the anti-traction league, played by silkily named Icelander (incidentally, countryman to Icelandic leading lady Hera Hilmar), Leifur Sigurðarson: 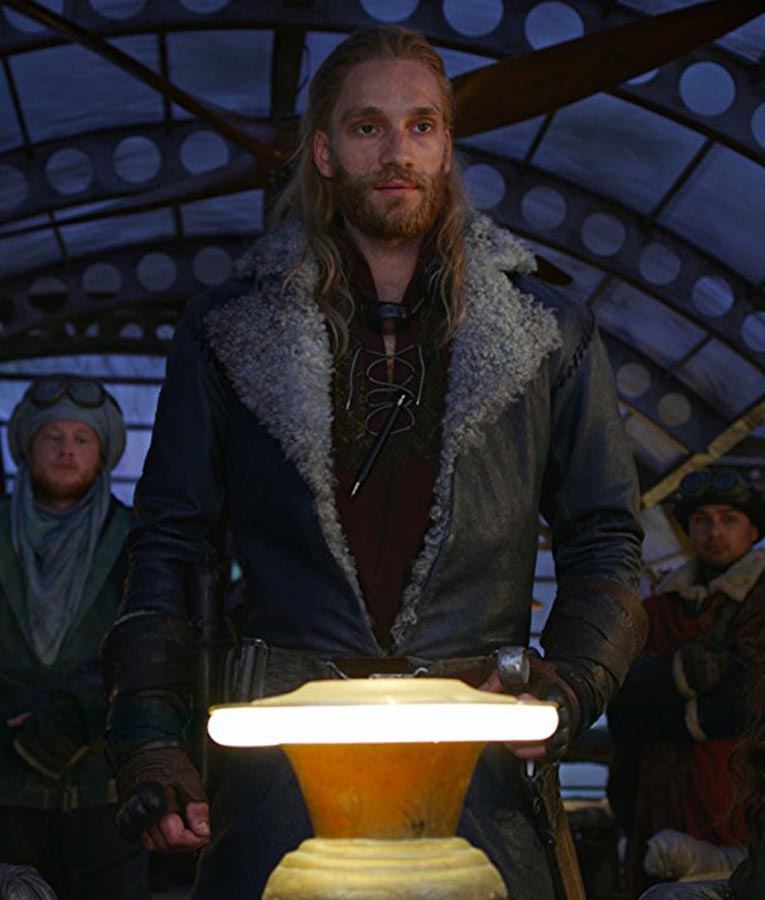 All in all, I think we can safely conclude that, while the film does admittedly “go south” (literally & figuratively) after its magnificent opening sequence (which, in my view, would still be worth the price of admission), the costumes remain splendiferous throughout.

Thus, please join me in issuing a hearty “Bravo/Brava!” to ->